In large cities, urbanization often takes over peri-urban agricultural spaces generating an increase in flooding phenomena and in the exposure of human and economic stakes. In the context of climate change, this land use strategy appears to be unsustainable. Agriculture then appears as having a role to play in flood protection by retaining and storing water volumes to protect more densely urbanized areas. However, flooding and peri-urban location have advantages and disadvantages that may affect the viability or development of these farms in the long term, especially in the context of climate change. On the scale of a metropolis, the Great Montpellier, the objective of the research project is to analyse how agricultural activities located in flood-prone areas can contribute to the adaptation of territories to the impacts of climate change. The case study chosen for the project corresponds to the perimeter of the so-ii observatory which includes the entire perimeter of the Montpellier Metropolis. It is particularly relevant since the territory endures frequent flooding, increasing urbanisation, changes in use in exposed areas, and it currently has a variety of agricultural activities in the peri-urban area. Moreover, the so-ii observatory is an opportunity to build long term partenerships with local stakeholders et to capitalize data. Within the project, we will tackle four specific objectives : 1/ an agro-economic analysis of adaptive capacities of agricultural systems in peri-urban flood zones, 2/ an urban analysis of constraints and opportunities for peri-urban agriculture in flood-prone area, 3/ a synthetic analysis at the territory level, 4/ an opening to the international dimension. We propose to address these issues through a multidisciplinary approach including agronomy, economics, geography and urban planning. Our project is structured in four work-packages, each aiming at answering one of the specific objectives and feeding each other.

The methods chosen to address these objectives are: surveys, participatory workshops, modeling, analysis of urban planning documents. The results of the project will be the subject of scientific reports and publications. Given the strong local partnership and the high stakes in terms of policy support, a feedback workshop is planned with local stakeholders. This research question has an international scope. These same questions are posed to the scientific community in the United Kingdom, Thailand or Madagascar for example. To tackle the fourth objective of our project, we will organized a scientific workshop by inviting international researchers identified on the subject to present and discuss results and perspectives. 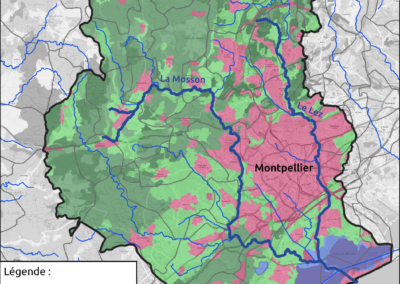